The Library now has all 8 locations open and some meeting rooms are available with limited capacities. See more details. 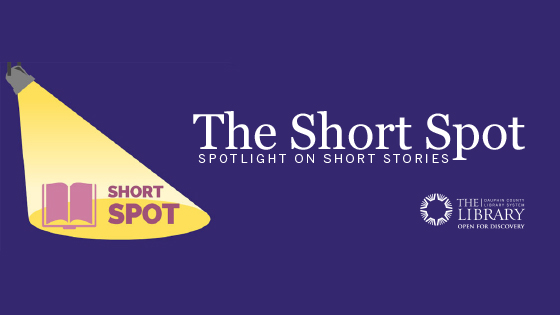 Hello and welcome to Beyond the Shelves’ newest segment, Short Spot! Every week, we’ll be highlighting either a short story or essay, and providing some context and discussion for why we think it’s worth your time to read. Though less lengthy than other forms of reading, short stories and essays can still be every bit as substantive as their heftier counterparts. Some of the most historically important pieces of prose can be found in brief political essays, and some of the most chilling and recognizable dystopian dreams have come from short science-fiction stories. There’s so much to be found in even the smallest pieces of work, but we forget sometimes to search there! Through this segment, we hope to encourage you to engage in these shorter forms of literature, expanding your literary horizons by at the same time shrinking them down. Though the things we’re reading will be brief in length, hopefully they will stay with you for a long time to come.

This week, we will be reading “The Devil in America” by Kai Ashante Wilson. Readers should be warned that this story contains scenes that some may find disturbing and difficult to get through—racial violence is a prevalent theme, with sometimes graphic description—but encouraged to know that “The Devil in America” is beautifully written, hauntingly engaging, incredibly poignant, and well worth the read. Using the ongoing history of racial injustice in America, Wilson weaves an incredibly captivating tale which is both fantastical and factual, seamlessly melding the past and the present in a way that is harrowingly unique.

Wilson traces the inspiration for this story to an interview with Sybrina Fulton, the mother of the late Trayvon Martin, who was tragically murdered by George Zimmerman, a former member of local neighborhood watch in 2012. “The maddening crux of the discourse around this crime was, for me,” said Wilson, “how so many of the smartest people kept applying the tools of the Enlightenment—measured reason applied to juridical exegesis—to the murder of Trayvon Martin, even though American jurisprudence in fact works along science fictional—or diabolical—principles.” Wilson explains that, though we supposedly live under the rule of equal justice for all in the United States, “Here, you can never say ‘The law says this, and so the consequences will be thus.’ In America you must always ask first: ‘Well, who did it? And what color was the victim?’” because, as history has devastatingly shown time and time again, “Any law can magically bend or break around pale enough skin—even cold-blooded murder can slide off—while those same very laws somehow tauten up into their most rigorous interpretation when the alleged perpetrator wears black skin.” Of this racially based juridical injustice, Wilson explains that he felt as though he were “perceiving some non-Euclidian distortion of the American time/space continuum, or the countrywide effects of an ancient curse.” This idea, that there exists a deep evil that permeates from the bloody past through the tumultuous present, and on into America’s uncertain future is readily apparent in “The Devil in America,” and will likely occupy your headspace long after you’ve finished reading.

To read some of Kai Ashante Wilson’s longer form works, check out A Taste of Honey, or The Sorcerer of the Wildeeps, both available at the East Shore Area library, or your preferred DCLS library branch by request. To read another of Wilson’s short stories, amongst some other phenomenal short sci-fi selections, check out The Best Science Fiction & Fantasy of the Year, Volume Twelve, compiled by Jonathan Strahan and available at ESA, or your preferred DCLS branch by request.


Emily is Assistant Adult Programming Coordinator at The Library