Latino Hispanic Professional Association continues its support of The Library

On June 30, the Latino Hispanic Professional Association (LHPA), made a very generous donation to the Kline Library in Harrisburg.

Thanks to LHPA, The Library will now be able to offer its Latino and Hispanic members the digital edition of Pimsleur English for Spanish Speakers for free.

“Recently LHPA gifted the proceeds from a fundraiser to The Library to make it possible for them to purchase three levels of the digital Pimsleur English for Spanish Speakers (PESS) resource, which will be available to area library members holding a valid library card,” said Yolanda Perez-Rivera, Founding President of LHPA, and Professor Emeritus at Harrisburg Area Community College.

Using Overdrive, members are able to access this new resource for learning to speak and understand English as a second language as a downloadable eAudiobook through The Library’s catalog. All three levels of PESS feature thirty, 30-minute audio lessons and reading instructions. This resource can be found quickly by searching “Pimsleur English” in The Library’s catalog.

A Legacy of Support

For more than ten years, LHPA and The Library have been partnering to provide free resources to the Latino/Hispanic community around the Kline Library and in the Harrisburg area. In 2008, LHPA, a volunteer-led membership association for Latino and Hispanic professionals in Central Pennsylvania, and The Library announced the “opening” of the Latino Library Corner in Kline Library. This unique corner of the library was supported by donations by many area businesses and created a new space for learning about Hispanic and Latino cultures represented in The Library’s community through video, magazines, literature and art.

“For many years, LHPA has supported the Kline Library by providing donations to purchase materials for the benefit of the Latino/Hispanic community; thus, we continue to support the library’s mission to ‘build community and transform lives by connecting people, ideas, and opportunities,” said Raffy Luquis, Associate Professor at Penn State Harrisburg and current LHPA President.

Latino Library Corner has since become the World Language Collection. This collection consists of print and non-print materials meant to supplement the recreational and instructional needs of library members who speak languages other than English. It is housed primarily at Kline, East Shore Area and McCormick Riverfront Libraries.

In 2012, LHPA once again showed its support for The Library and its community by donating $1000 to purchase children’s books written in Spanish. These books were added to the World Language Collection which consists of over 9000 print and digital titles for all ages and can be found in The Library’s catalog by searching “World Language.” 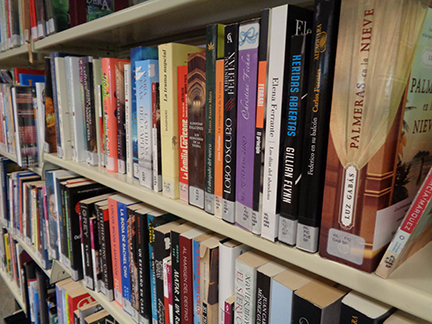 “We look forward to cultivating our partnership with LHPA,” says Karen Cullings, The Library’s Executive Director, “and are thankful to this group of community leaders for their continued support of the Latino/Hispanic community in the Harrisburg Area.”

Offering a library collection that represents and supports the community it serves is at the heart of The Library’s mission. As part of that commitment, The Library began a diversity audit of our collection in the spring of 2019. Read more about that audit here. We are always looking for feedback from our community. Let us know what you think and help us by suggesting other titles to add to our World Language collection that will enhance its diversity.