As they choose readings for The Library’s Storytime sessions, staff have a wide range of books featuring a diversity of faces.

“I would hope that the kids who come to Storytime now would see someone who looks like them and doesn’t look like them, and that would become the norm,” says Youth Services Administrator Samantha Lowe. “It’s not that they wouldn’t see race, but they would grow up knowing there is a diversity of experiences they could appreciate and accept.”

In recent years, the staff has deliberately sought out books that feature diversity in faces and experiences.

“We have to reinvent everything now anyway, so let’s make sure we are doing it right,” says Lowe. 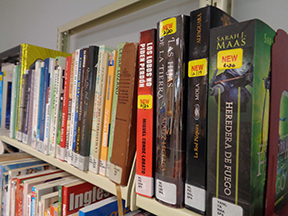 Diversity matters in adult books, too, and since spring 2019, The Library has been conducting a diversity audit. It’s a close look at The Library’s 400,000 titles to make sure they mirror the community and project diverse perspectives.

“A diversity audit is looking at not just numbers but also what’s reflected in those numbers,” said Collection Management Administrator Yvonne Carmicheal.

The process is continuous as The Library assesses whether authors reflect diversity in race, ethnicity, religion, gender identity, and disability. The audit also examines whether titles reflect real life – for instance, not just stories of Native Americans in the Old West, but Native Americans of today, dealing with contemporary issues.

Staff will submit initial findings to The Library board’s public services committee and will continue conducting the audit as a matter of course.

“The audit represents an ongoing commitment to our mission of serving the needs of all the members of our community,’’ says Executive Director Karen Cullings. “We are working to ensure inclusion and equality in everything we do.’’

As builders of community connections, The Library developed a new list of titles useful for anyone seeking a better understanding of race relations. The list, titled “Knowledge Promotes Understanding," includes recommended reading for adults, young adults, and children.

Community groups and Library members can get involved by submitting suggested titles for the list and all collections.

As The Library reopens in phases, it is setting the stage for ongoing dialogue, Cullings says.

“Libraries are trusted spaces where people can discover new perspectives and start discussions that enlighten and inform,” she says. “As the groundswell grows for racial justice, the Dauphin County Library System stands strongly against racism and strives to provide resources for conversation, action, and fostering understanding.”