Voices of F.E.W.: Library program to spotlight a 19th-century giant of abolition and voting rights 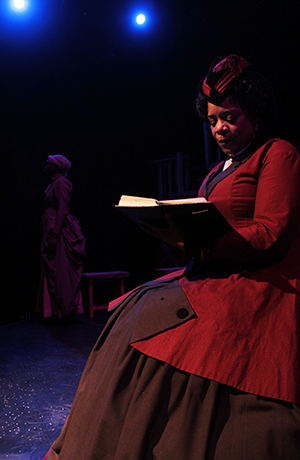 Frances Ellen Watkins Harper was a household name in the 19th-century.

Suffragist, abolitionist, orator, and poet. First Black woman to publish a short story. A Baltimore-born teacher who lived her adult life in Pennsylvania and joined the antislavery movement when Maryland decreed that she and all other free African Americans could no longer enter her home state.

Never heard of her? You’re not alone.

Harper is among the list of women and African Americans whose contributions to civil rights and racial justice were not written into the history books. Now, The Library is helping correct that oversight by presenting a virtual, time-traveling visit from the indomitable Harper.

Voices of F.E.W.: The Life and Legacy of Frances Ellen Watkins Harper is scheduled for March 17 at 6 p.m. Based on the one-woman show by Sharia Benn, the program is part of The Library’s Mary Sachs Series and funded by the Mary Sachs Charitable Trust.

Since the development of Sankofa began in 2015, Benn has sought to create a theater company that would tell the African American experience from their perspective.

“I wanted not only to tell the story but challenge the community on issues around race and the things that divide us, while it enlightens,” Benn says.

The upcoming program supports that work, blending with The Library’s commitment to serve as a platform for social justice and community dialogue.

Benn first learned of Harper about 10 years ago as a historical reenactor with the Pennsylvania Past Players. That “transformative experience” immersed Benn in the life of Harper, who worked and traveled with all the suffragists and abolitionists whose names still resonate – Susan B. Anthony, Elizabeth Cady Stanton, William Still.

“John Brown had her letter in his inside coat pocket when he was hanged,” says Benn. “She was on the same podium and doing the same oratory and speaking circuit as Frederick Douglass. Newspaper clippings show this. People talked about her great oratory skills, but we don’t know her today.”

Harper foresaw today’s “fair trade” movement by refusing to wear clothing made from inhumanely sourced fabrics. As a sought-after speaker, including at suffragist conferences, Harper never shied from hard truths. 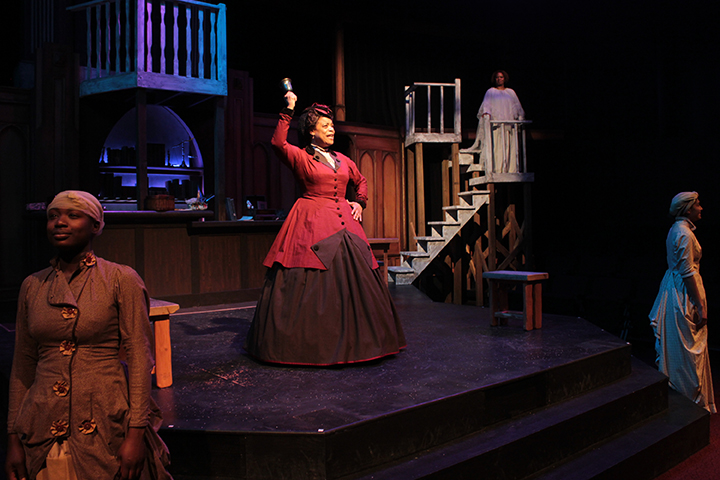 “She called White women on the carpet for dismissing and not including the Black woman in the struggle,” says Benn.

Harper’s name fell from the history books because she challenged the status quo. For the White males who wrote history, Benn says Harper’s story of overcoming hardship and using her innate talents to achieve renown was “too empowering.”

For The Library’s virtual program, Benn will portray Harper in wardrobe, “having a spot of tea with the viewers.”

Benn will appear initially in wardrobe as Harper, speaking in her voice and sharing her story and poetry. Then, Dr. Jean Corey, English professor and director of the Center for Public Humanities at Messiah University, will offer insight and historical context on Harper’s writings.

Ashley Famularo, The Library’s adult programming and outreach coordinator, sought out Voices of F.E.W. for a fresh take on Women’s History Month programming.

“Sometimes, we can get stuck in a rut of celebrating the same handful of women every year,” says Famularo. “If you dig a little deeper, there are so many more amazing women – specifically in our local history, including those like Frances Ellen Watkins Harper – who had a national impact.”

As a bonus, The Library is partnering with the creators of “A Gathering at the Crossroads,” a commemoration of the 15th and 19th Voting Rights Amendments that depicts Harper and three other civil rights pioneers.  Developing Voices of F.E.W. into a Library program offered “a nice way to celebrate that partnership” and show the directions that community collections can take, says Famularo.

Benn’s favorite Harper poem is “Bury Me in a Free Land” – a plea for a grave in a country where all people are free not just from physical chains but also any constraints on their minds and human dignity. With prescience, Harper portrayed the slave trade as the human trafficking of its time.

“If I saw young girls from their mothers’ arms, bartered and sold for their youthful charms, my eyes would flash with a mournful flame, my death-paled cheek grow red with shame,” Harper wrote.

Benn hopes the program will inspire people to become change agents and learn more about Frances Ellen Watkins Harper and her world.

“If you learn about Frances,” says Benn, “then you start learning about William Still, Lucretia Mott, and these other historical giants that they don’t teach you in school.”

Voices of F.E.W.: The Life and Legacy of Frances Ellen Watkins Harper, 6 p.m. March 17. The presentation will be on Zoom, to receive a link, register at www.dcls.org.