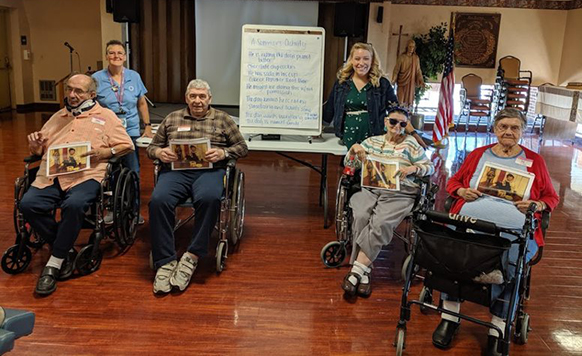 Looking at a photo of three little boys, the nursing home resident declared that it was him and his brothers. He talked about their childhood days.

The photo was not of the resident’s family, but no one corrected him. His mind was engaged as he happily reminisced with fellow residents. That is the point of TimeSlips, a program offered by The Library for free to five local nursing homes.

“He was feeling the comfort of family,” says Jessica Finkenbinder, recreation director at the Jewish Home in Lower Paxton Township. “It bought comfort to see that picture and to think about when he was young with his brothers.”

The Library launched the initiative before COVID-19 halted access to nursing homes. During the pandemic, The Library has continued to offer TimeSlips resources to its five participating nursing homes, which use them to help keep residents engaged and active.

TimeSlips is a national program designed to spark creativity in people with dementia and cognitive impairments. Participants are not asked to recall lost memories, which could cause shame and embarrassment. Instead, a typical TimeSlips program presents nursing home residents with a photo. Each participant contributes thoughts about what they see in the image, whether from memory or the present. At the end, the facilitator compiles their contributions into a cohesive story. 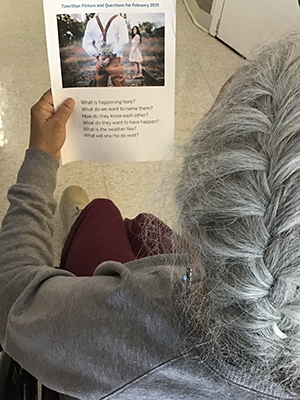 “During TimeSlips, there are no right or wrong answers,’’ says Marla Cattermole, The Library’s Outreach Pilot who is also a certified TimeSlips facilitator. “Residents take pride in being able to answer questions and getting validation.”

TimeSlips encourages residents to brainstorm and conclude with a finished product, says Finkenbinder.

“They’re bouncing ideas off each other,” she says. “They want to feel like they’re a part of something, and they can contribute something.”

Taking TimeSlips into some of Dauphin County’s nursing homes fits neatly into The Library’s Strategic Plan for breaking down the traditional walls of libraries, says Adult Programming and Outreach Coordinator Ashley Famularo.

“One of our goals is to build a connected community – to identify barriers in our community that are preventing access to library resources,” she says. “It’s also about encouraging general socialization, especially now.”

"With support provided by the Arts for All Partnership, a partnership between the Cultural Enrichment Fund and the Greater Harrisburg Community Foundation, a regional foundation of The Foundation for Enhancing Communities (TFEC) in Harrisburg, The Library is preparing to train six more staffers as TimeSlips facilitators. They will take the program back inside nursing homes as they reopen and could allow expansion to more facilities, Famularo says."

When COVID-19 closed the doors to nursing homes, Cattermole and Famularo put their heads together on ways to maintain TimeSlips and other services offered by The Library. Drawing ideas from the national TimeSlips program, they created a kit for monthly distribution, complete with photo, suggested questions, and worksheets.

Nursing home activities directors can get stuck for new ideas, so they are continually searching for new ways to engage residents, says Finkenbinder. “I’ll wait for the new TimeSlips. I’ll put it on my calendar. Animal pictures are always cute. Animals and kids. The kids’ ones really make the residents smile.”

Cattermole also adds a coloring page to the packet. The Jewish Home staff uses it to offer TimeSlips participants an additional, stimulating activity that they can do on their own, not just by coloring but by adding a title and a slogan.

“If they’re left with something to ponder over, put aside, and pick up again, to create on their own time, that gives them a sense of ownership, of doing something on their own,” says Finkenbinder. “It’s something to be proud of.”

For nursing homes always in need of new activities, TimeSlips is “absolutely free, but what you’re getting are professional, certified resources,” says Cattermole.

During the pandemic, The Library maintained its array of services for nursing homes. Craft kits, refreshing the books and audiobooks for inhouse book exchanges, even links to videos made for The Library by local musicians, The Library was always responsive with “whatever help I asked for,” says Finkenbinder.

The videos are especially appreciated for bringing music to residents and staff who have not had live entertainment in their buildings since the pandemic started.

Finkenbinder deeply appreciates the access to TimeSlips that The Library provides. For residents, it is a time for reminiscing, creating, and safely socializing, “which is a big thing, especially now.”

Even Finkenbinder and Jewish Home staffers eagerly await their packets and the fun surprise of seeing what that month’s photo will be. In February, of course, the photo showed a young man about to give roses to his sweetheart.

In addition to giving residents a boost, TimeSlips and The Library’s effort bring a smile to staff members.

“Our residents know that the community is there for them,’’ Finkenbinder says. “We appreciate that The Library is supportive of them.”