For your safety, face masks are required while inside all of our libraries and members are asked to limit their visits and computer usage to 1 hour.
If you are unable to wear a mask, curbside and electronic services are available. See more details.
COVID-19 Vaccine information > 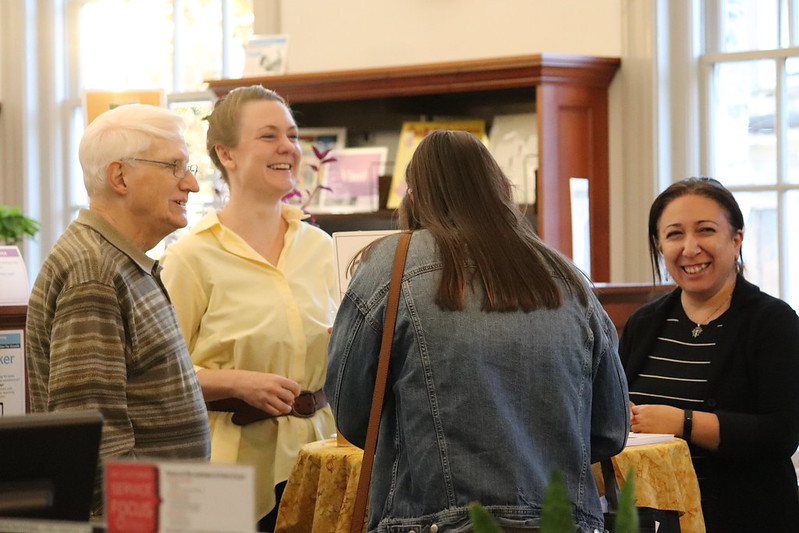 After deciding it made sense to help both city-based libraries, a joint friends group is forming to support the McCormick Riverfront and the Madeline L. Olewine Memorial libraries.

“A really powerful Friends group can give the library the flexibility to try some new things by bringing in a lot of funds,” says Lisa Howald, manager of the McCormick Riverfront Library. “They can also help get the word out to people about all the tremendous resources we offer.”

McCormick & Olewine Library Friends, a.k.a. MOLF, got its start last fall and is planning for the day when all The Library’s buildings open their doors.

After Howald joined McCormick Riverfront in early 2018, ideas for new initiatives started bubbling up. She realized that a Friends organization could help make them a reality.

Sell coffee for the library members who often request it? Great idea, but staffers are too busy to be both baristas and librarians.

An office-supply vending machine? Nice for fulfilling frequent requests for envelopes or manila folders, but that would be several thousand dollars from the budget.

Howald started spreading the word, seeking potential Friends among library supporters and fellow members of Harrisburg Keystone Rotary Club. The group that resulted felt that it could serve two of the system’s city-based libraries.

McCormick Riverfront Library has been in continuous operation in downtown Harrisburg since 1914. Typical patrons include state workers popping in for books and breaks during lunch, homeless residents seeking daytime respite, and jobseekers using the computer.

In uptown Harrisburg, Madeline L. Olewine Memorial Library opened in 2006. It is a neighborhood center, where nearby residents attend programs for children, teens, and adults.

A joint Friends group made sense to give the idea momentum and pool resources.

“We wanted to make it for the two libraries in the heart of the city,” says Tom Boone, MOLF’s recording secretary. Boone is a former officer of the highly active Friends of the East Shore Area Library. When he and his wife, Becky, moved from Lower Paxton Township to downtown Harrisburg, they made McCormick Riverfront Library their home library. Boone was among those who answered the call for the new friends group.

While Madeline L. Memorial Olewine Library, with its parking lot and residential setting, can accommodate traditional Friends fundraisers such as book sales, the focus will differ for McCormick Riverfront Library, Boone says. Some MOLF members are active in downtown institutions, allowing the group to seek sponsors and encourage use of its resources by the schools and businesses of downtown and midtown Harrisburg.

Events such as Books & Brews in October 2019 have already proven their popularity at McCormick Riverfront, so future Friends-organized programs could follow a similar model of fundraising events supported by sponsors who hope to tap into the library-patron demographic. Such events would draw attention to the library as a resource provider, with databases, computers, and programming in addition to its bookstacks.

“We want to promote the concept of libraries as serving the community,” Boone says. “The point would be to show the variety of things that libraries can do.”

The first McCormick-Olewine cross-pollination occurred around Olewine’s popular Cookbook Book Club. Pre-shutdown, club members would congregate to talk recipes and share dishes made from their favorite cookbooks. After the libraries reopen, Boone says the club might alternate between McCormick and Olewine when they resume meeting.

Boone sees MOLF’s role as asking the library managers: “What is it that you’re not getting anywhere else that we can give you?”