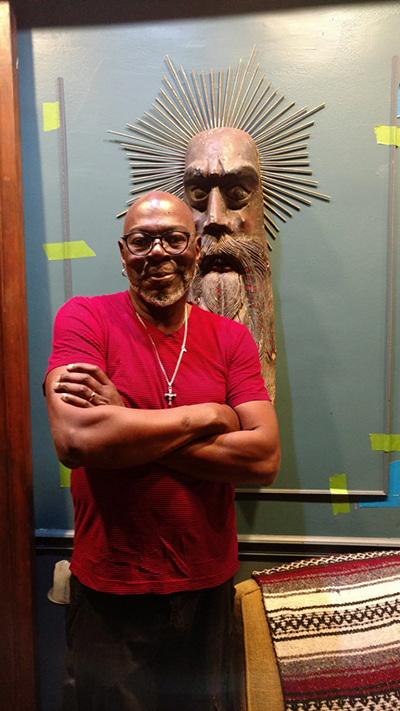 In Lenwood Sloan’s native Pittsburgh, parents worked two or three jobs. There was no childcare. No afterschool programming.

Sloan is the driving force behind the Commonwealth Monument Project’s “A Gathering at the Crossroads: For Such A Time As This.” The monument on the state Capitol grounds commemorates voting rights for African Americans and women, while remembering those who lived in the culturally vibrant, now extinct Old 8th Ward.

One of the 19th century civil rights pioneers depicted in the monument is Harrisburg native T. Morris Chester – soldier, journalist, and educator. Soon, just a few blocks down Walnut Street, The Library’s expansion of McCormick Riverfront Library into the renovated Haldeman Haly House will include the T. Morris Chester Welcome Center.

It’s part of a rich and growing partnership between The Library and the Commonwealth Monument Project. The Library is also hosting seven sessions of Sloan’s longstanding “Live and Learn” Lyceum & Chautauqua series in a monthly, virtual format this year, including sessions that explore Chester’s multi-faceted legacy. The next session, Mine the Museum - Finding Thomas Morris Chester,  will take place on March 18th on Zoom. Registration will open next week, visit dcls.org/adultevents to register and for more information. Click here to view the February 18 session, Making Monuments

What does the Commonwealth Monument Project bring to The Library in this partnership? We bring a dialogue on diversity and a coalition of change agents to The Library. We’re anxious and eager for our programs to engage with them and highlight, invigorate, and galvanize The Library’s cultural competency programs by weaving our 15 years of activity into their continuity.

How does The Library help elevate awareness of Harrisburg’s little-known civil rights history? Having a home base for the free-floating elements of our efforts gives credence and gravitas to each of them. It provides an ongoing interpretation of the value and importance of the monument. My new slogan is, “The monument is not a place for pigeons.” The Library gives us a turnkey to explore the lives of the people depicted with the monument. The monument becomes like a GPS marker for relevancy.