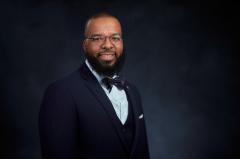 Libraries have been there for Brandon Flood at every phase of his life. As a student growing up in Harrisburg, The Library offered books to read and internet access for schoolwork. When he was a re-entrant getting his life together after leaving prison, The Library was his tranquil space for printing the materials needed for job searches.

Now, as secretary of the Pennsylvania Board of Pardons, he uses libraries statewide as ideal gathering places for clinics introducing re-entrants and criminal justice system workers to the pardons process.

Since joining the Dauphin County Library System Board of Trustees, the Steelton resident hopes to help strengthen The Library’s ties to the community and make more people aware of its wealth of resources.

How did you join the Dauphin County Library System board? Dauphin County District Attorney Francis Chardo recommended me. Over the last five years, we’ve become acquainted and worked closely on several things. Serving on the Library board is really meaningful. It’s meaningful because I’ve utilized the services. I like to be engaged. This board assignment wasn’t meant to be a résumé builder but something I can do to improve Dauphin County.

What do you hope to accomplish through The Library’s board? We can be a little bit more assertive in engaging the community, particularly our urban centers, about what things they want to see. It’s a matter of engaging the community to provide concrete suggestions, as long as they’re feasible.

What was the most influential book you ever read? “The Autobiography of Malcolm X” was instrumental in me being able to fathom that people can transform themselves, not just in their respective community but globally. That let me know that the sky’s the limit.

How did the Library help with your re-entry? There was never a time when I felt the re-entrant community wasn’t welcomed or was stigmatized at The Library. When you’re embarking upon job searches, being able to have multiple copies of printed résumés is huge. When I went to apply for a position, I felt confident having that résumé on hand, as opposed to showing up empty-handed.

What do you like best when you walk into a library? Sunlight. Lighting. It’s bright. It’s inviting. It provides a sense of comfort. As kids, we didn’t like adhering to hushed tones, but as an adult, you can appreciate having a place of refuge to collect your thoughts.

Why should people support The Library? The more folks understand the full scope of services that The Library provides, the greater appreciation they’ll have, and as a consequence, the likelier they’ll be to support it. Once you find out, The Library sells itself.